A preface to the 8N

“Our competition is the horse!” -Ford. The 9N is the precursor to the 8N in both mechanics and spirit. Production of the Ford 9N began in 1939 when Harry Ferguson approached Henry Ford with a new design that was centred around his 3 point hitch design and improved hydraulics. Ford liked it and set out to make a tractor with a simple and easy to use design. The Ford-Ferguson (commonly called the Fordson) tractor hit the market with relative success and sold for $585 including the rubber tires, power take-off, Ferguson hydraulics, an electric starter, generator, and battery. The 9N weighed in at 2340lbs and sported 13 horsepower and quickly became the industry standard. The 3 point design made it a very effective tool for plowing and was even used by the US Navy and the Air-force to tow aircrafts and was nicknamed the “Moto Tug”

Best in the North-West!

The 8N! Bigger little brother to the 9N in several ways! Improvements were made following the split between Ford and Ferguson in 1945. Henry Ford II took over the family business when his grandfather Henry Ford Sr. fell ill. Ford II could not use many of the designs patented by Ferguson so it was back to the drawing board. The 8N was now equipped with a 4 speed transmission compared to the 3 speed of the 9N as well as an increase in PTO (power take-off) and horsepower. In addition, Position Control was added to get around Ferguson’s original hydraulic patent and improved performance in varying soil conditions. The 8N was a bit heftier and weighed in at 2740lbs and models were painted with a red body and light grey sheet metal. By the end the 8N had become the best selling tractor in North America. A model can be found painted in the Topher Farm Blue and Yellow near the Kiosk via the 143.

There was a model in between the 9N and the 8N called the 2N. It was very similar to the 9N with minor improvements but there was a key difference. Seeing as the military needed supplies for the war many models had steel wheels instead of rubber. These tractors also did not have batteries and used a “magneto ignition” system which had to be started with a hand crank. 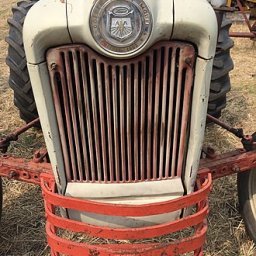 photo retrieved from https://bringatrailer.com/listing/1953-ford-ford-golden-jubilee-tractor/ In 1953 Ford came out with the NAA model that was dubbed as the “Golden Jubilee”….